Dancing alone at the Carnival 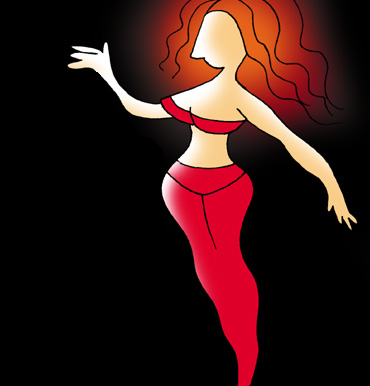 The Rio carnival is really not about 'what you see, but how you feel,' a German friend had told me. Trust the Germans to come up with wisdom of that order. Brazilians don't say such things. So, now actually at the carnival in Rio de Janeiro, what am I seeing, how am I feeling?

I see this girl dancing to her own rhythm, all by herself.

Not that there is no music. Actually, there is the deafening, pulsating Samba, from literally a thousand drums drowning out the words of the songs, as the carnival parade passes in front of us, a riot of color, sound and sheer energy. But the girl, and I can only see her back, is swaying and moving driven by some inner force, seemingly superior to all that surrounds us.

I am seated in a pavilion for special invitees, about thirty of us chosen ambassadors. Huge crowds are generally not my scene, but how can I be in Brazil, spend a slice of my life here, claim that I am trying to understand and interpret it, and not see the carnival, the thing that is supposed to epitomise Brazil, apart from football.

Luckily, we have been invited by the city authorities to a prestigious stand, I have decided to come, and am now perched in a seat with a vantage view watching the flow beneath us with a beer in hand.

The girl is in a off shoulder long red dress, in the standing space seething with people, and as I said even seen only from her back, is for me already a living symbol of all the sensual elements of the elemental carnival that swirls around us.

And flow and swirl it does. We have reached Sambadrome, a special one kilometre stretch of a road designed for the carnival parade, with seating and standing space for 90,000 spectators on either side of the road. The show is on for four days, nearly half a million see it, but the tickets have sold out months in advance. The parade starts at nine at night but what with the crowds, queues and commotion we have reached at seven and presumably the girl, a part of the crowded enclosure at six.

It is to go on till six in the morning, an event for nearly twelve hours during the night, at the peak of summer in this city by the sea. An idea of what passes in front of the spectators is known to most of us already through the television images every year. Huge floats with extravagant themes, thousands of dancers with elaborate costumes and yes, also hundreds with no costumes at all, none so whatever except virtually what God gave them, shaking and twirling in a frenzy to the beat of incessant drumming.

No, it is not your Republic day parade on Rajpath in Delhi with its precision and order, it is not the Ram Lila or the Durga Puja cultural pageant on display with jhankis of our diversity. This is more like ten thousand people, all attired in coordinated fancy dresses ranging from rabbits to robots and as I said many not attired at all but body painted with glitter. All letting themselves go in what is described as the greatest party on earth.

The girl in red has now changed her style of dance. Is it a new rhythm by the next group now in front of us, is it in step with her boy friend also dancing somewhere in this chaos unseen by me, or is it an unheard music which moves her, I cannot tell in the medley of the pounding sound and the gyrating bodies all around me. What I can tell, unmoved by such music as I normally am by temperament, is the energy and enthusiasm in the movement.

Where does the energy and the compulsive gaiety come from, I begin to wonder despite the mind numbing sounds. The carnival is actually four days in February when all of Brazil and not just the city of Rio goes on a binge of carefree living, excessive boozing and boisterous prancing on the streets. Of course, the Rio carnival is the most famous, but the carnival spirit is everywhere all over the country, akin to our national mood if Diwali and Holi were to fall on the same day, and that too on a day when India has won a one-day match against Pakistan in the last over.

It is a time for people to celebrate on the streets, to embrace and kiss strangers, shed all inhibitions and to live by the hedonistic creed. I am not sure we can really go all the way in India; I am seeing now that Brazilians can, and that too year after year. Despite our common humanity, we are after all very different people.

The flesh being weak and my mind being Indian -- and so very un-Brazilian -- I begin to ponder about the history and traditions of this festivity. So many years in diplomacy has turned me into this, I tell myself: A perpetual observer and a reluctant participant, even in a carnival.

Like many things in Brazil, the carnival too is a construct of European and African traditions. Colonial Europe in countries like Italy, Spain and Portugal had a tradition of a few days of masked balls, heavy drinking and eating and in general, a season of gay abandon before the Easter heralding a period of abstinence and austerity.

On this colonial tradition, the African influence of Samba music and dance was superimposed when in the city of Rio, a parade came to be organised with a competition between different dancing schools. This tradition started as early as in 1850 and over the years the Carnival in Rio came to grow in scale, special effects and spectacle.

Today's Carnivals are organised like the Olympics game. They are huge productions in which different Samba schools compete with each other to excel with different themes, music, dance steps, costumes and glitter. The majority of the participants come from the poorer parts of Rio, many from the favelas, the slums on the hill sides which are a characteristic of the city.

It is a community organised event of which the poor in Rio are equally proud and prepare for their productions throughout the year. Every year there are controversies and scandals: this group has been financed by the drug lords controlling the slums, that group has a eight year girl as the star attraction and isn't that amounting to pedophilia, a third has bribed the judges etc, in other words like the IPL aspects of a money driven enterprise.

Despite all this, the carnival is not a spectator sport; it is a celebration of the anonymous individual in a collectivity.

I look down below our pavilion again to spot the girl in red. It is early morning by now and many of us in the special enclosure are quite exhausted even with our comfortable seats, cold and potent refreshments and relative physical inactivity. She on the other hand, has never stopped dancing and if anything her energy level seems to have increased. She never once turns back either and I therefore do not see her.

Who is she? What does she really look like? Did she come with someone and if so where was her friend? Why is she dancing alone? Alas, I will never know. Snatches from a half-remembered famous Brazilian Bossa nova song The girl from Ipanema comes to me, as we leave:

Tall and tan, young and lovely,
The girl from Ipanema walks on lonely,
Oh, but he watches so sadly,
Yes, he would give his heart gladly.

B S Prakash is India's Ambassador to Brazil and can be reached at ambassador@indianembassy.org.br

Join the party in Rio!

In Brazil, the ball is the world