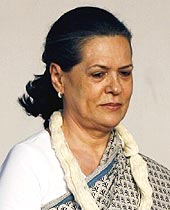 As the Indian National Congress steps into its 125th year, Amulya Ganguli says that Sonia Gandhi has played a remarkable role first in the party's comeback and then in its rise to power, her corporate pattern of governance just what the party needed at this stage in its life.

Even the Congress's detractors would admit that the party has a remarkable capacity for rejuvenation. From the time it disproved Lord George Curzon's prediction in 1900 that the Congress was 'tottering to its fall', the party has surprised those who had expected it to fade away.

While the socialists have splintered into the various regional Janata outfits after the demise of the Praja Socialist Party and the Socialist Party of India, and the Communists are following them into oblivion, the Congress has not only managed to survive, but has attained power at the Centre at a time when it does not seem to have too many credible opponents. Not even the Bharatiya Janata Party, which is running out of steam after the failure to keep its promise to build a Ram temple at Ayodhya.

It will be futile to deny that a major factor behind the Congress's longevity is the Nehru-Gandhi family even if sizeable sections of the urban middle class are uneasy with the dynastic principle. Yet from Jawaharlal Nehru to his great grandson Rahul Gandhi, it is the party's first family which has not only held the organisation together but has acted as a magnet for voters, particularly in the rural and mofussil areas and now also increasingly in the metropolises as well.

Rahul, of course, is still some years away from becoming prime minister, but at the moment it is his mother, Sonia, who is the driving force behind the party's electoral success. Nothing underlines the value of the dynasty more effectively than the story of her ascendancy. As a person who was derided as a housewife by Jyoti Basu and who was reluctant to let her husband Rajiv enter politics, her role in the Congress's revival is worthy of a bestseller.

It was the period when the family took a back seat after Rajiv's assassination which convinced the party and its supporters about the dynasty's indispensability. The follies and failures of the two men who ran the party during the interregnum -- Prime Minister P V Narasimha Rao and party chief Sitaram Kesri -- ensured that the family would return to the centrestage after virtually elbowing out Kesri. As for Rao, although there is a school of thought which argues that he is a much misunderstood person because of the Babri Masjid demolition and actually deserves a better press because of his initiation of economic reforms to end Indira Gandhi's faux socialism, it is difficult to believe that the Congress would have had a bright future under someone so devoid of charisma.

Even if the value of good looks is unlikely to be emphasised in a serious analysis of the dynasty's success, there is little doubt about the utility of a handsome face if combined with other positive factors. In the latter's absence, the electorate treats the party with scant respect as when Indira botched the Congress's prospects by her recourse to dictatorial methods during the Emergency or when Rajiv squandered its vast majority by arousing suspicion about his complicity in the Bofors scam.

But the party becomes unbeatable when its good-looking, patrician leaders pursue policies with wide public acceptance, as during the Bangladesh war or when Rajiv was seen as Mr Clean.

After Rao alienated the minorities and Kesri drove the party into a cul de sac by withdrawing support from the H D Deve Gowda government for reasons which few could understand, it was only the dynasty which could rescue the Congress. Sonia Gandhi's subsequent successes will appear all the more extraordinary in view of the fact that she took charge of the organisation at one of its darkest moments.

Not only had the party lost power at the Centre, but the BJP appeared to be on the verge of replacing the Congress as the No. 1 party on the Indian scene with its manipulation of Hindu sentiments.

The fact that Sonia Gandhi had to read out her speeches in halting Hindi, and claimed to have majority support in Parliament in 1999 when she didn't, seemingly confirmed Jyoti Basu's derisive assessment. While her speeches lacked both fire and substance, she appeared to be returning to her mother-in-law's fake socialism, an inclination which made the party promise reservations in the private sector a few months before the 2004 election.

Not surprisingly, few expected the Congress to return to power. Yet, if it did so despite Sonia Gandhi's stilted speeches and the absence of the kind of inspirational messages which created electoral waves in the party's favour in 1971, 1980 and 1984, the reason was the belief among the voters that it was time for the dynasty again. It didn't seem to matter that Sonia lacked Indira's and Rajiv's popular appeal. What mattered was the restoration of the kind of politics which a Statesman editorial described as the 'return of the rose' when Indira defeated Morarji Desai in the prime ministerial contest in 1966.

The reference was to the rose which Jawaharlal wore in his button hole. But, in political terms, it meant a return to a time of grace, sobriety and accommodation and a rejection of communal animosity and caste tension which was the National Democratic Alliance's hallmark. If anyone understood the reason why the NDA was defeated, it was Atal Bihari Vajpayee, who blamed the Gujarat riots of 2002 for the loss. Similarly, the anti-Christian outbreak in Orissa played a substantial part in the NDA's 2009 defeat.

Sonia Gandhi, therefore, could be said to have benefited from the faults of her opponents more than any special achievement of her own. All that she had to do was to be at the head of the Congress to provide the assurance to the voters that her party would provide the much-needed healing touch to a society which had seen the BJP adopt the tactic of breaking mosques and attacking churches as a political ploy.

But leading the Congress to an unexpected victory was not Sonia's only moment of glory. She would receive even more accolades when she refused to become prime minister. The announcement to a stunned party and nation was the first sign of her political acuity. At one stroke, she defused the BJP's longstanding campaign against her foreign origin, compelling Sushma Swaraj to forsake her promise to shave her head if she did so and leave the rest of the Hindutva brigade in a state of bewilderment.

Evidently, Sonia realised that assuming the prime minister's position would create more problems than it would solve. But considering that she was still feeling her way in the turbulent waters of Indian politics after the "we have 272" blunder only five years earlier, her act of renunciation showed both the courage of conviction and an inner belief that she wouldn't lose ground if she conceded the top position to someone else.

True, in selecting Manmohan Singh for the post, she had chosen a man known for his integrity who wouldn't play foul. Even then, it was a risk not many would have taken. Before her, no one had turned down the prime minister's post anywhere in the world. She had set a precedent, therefore, which will not have too many imitators.

That was not her only act of statesmanship. Another masterstroke was the manner in which she moulded Congress politics to introduce a healthy corporate pattern of operation where there is a clear division of responsibility between the proprietor and the CEO. It was an innovation which must have been difficult to implement in a party where the propensity to grab the highest post is a major motivating factor followed by crafty manoeuvres to undercut potential rivals. No one was more adept at these tactics than Sonia's formidable mother-in-law.

Although the Congress had tried to circumvent this problem of personal clashes by dividing the responsibility between the prime minister and the party president via the 'one man, one post' principle, it had rarely worked because the head of the government ensured that the head of the party would be a nonentity. For instance, when Indira split the party to get rid of the party bosses in the 'syndicate' such as K Kamaraj, S Nijalingappa, Atulya Ghosh, Sanjeeva Reddy and S K Patil, she chose the subservient Dev Kanta Barooah of the 'India is Indira' fame to be the Congress president.

Under Sonia, however, the division between the party and the government has worked remarkably well. It will not be out of place to say that she has set an example which should act as a template for all parties and governments although it will be difficult to find another party chief like her and another prime minister like Manmohan Singh.

What is important to note is the latter is not a pushover. As much was evident from the passage of the nuclear deal, which did not initially have Sonia's approval.

Her reluctance to go along with the prime minister on this issue was evident when she endorsed the opposition of the Communists to the deal by saying that they had a point. This comment was apparently a reflection of her socialistic preferences, which had made her insist on the implementation of the rural employment scheme although the view of most economists was that it would amount to pouring money into a black hole. But if Manmohan Singh approved of the scheme despite his reservations as an economist about a populist measure which was unlikely to create any real assets and enrich only the middle men, Sonia similarly gave her assent to the nuclear deal even if she was not fully in agreement with the prime minister's views.

Even if Rahul had played a behind-the-scene role to bring her around on the deal, its passage was a clear sign that the proprietor-CEO arrangement was working satisfactorily with neither stepping on the toes on the other, as most people had earlier expected. Their disillusionment must have since been accentuated by growing evidence of Manmohan Singh's assertiveness on economic reforms in the welcome absence of the Left. Yet, Sonia has lost none of her authority. Whatever initiative the prime minister may take, there is little doubt that it is Sonia who is in charge.

What is more, the process of sharing of responsibility has not ended with the division between the prime minister and the party chief. It has been extended to the cabinet as well with ministers like Pranab Mukherjee and P Chidambaram exuding authority and confidence unlike other ministers before them. Although this kind of decentralisation may have led to Sonia making her first major mistake over the Telangana issue, it is still a worthwhile style of functioning. If she had held a more intensive series of consultation before the announcement, the false step could have avoided.

Despite this unexpected lapse, there is little doubt that the Congress has been fortunate enough to find a leader who has breathed new life into a party which had never been its true self after Nehru's death. While it lurched under Indira from the glory of 1971 to the shame of 1975, and under Rajiv from the hope of 1984 to the despair of 1987, the party has been able to lift itself up by its bootstraps under Sonia's guidance. Given the dysfunctional state of the opposition, it can look forward to a better future in the 21st century than what seemed possible in the closing years of the last century.

The path ahead for Advani and the BJP